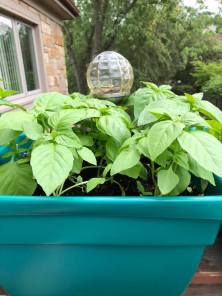 Vic and I dug into some much needed housekeeping this morning before heading to a local greenhouse to acquire Plantskydd granulated animal determent for rabbits, voles, chipmunks, and deer.  Yesterday morning, I had 24 green beans plants, last night I had 2. The bunnies I mentioned in another blog post had a green bean dining feast. GRRRR … This stuff you sprinkle on the ground around raised beds or at least 2 feet away from your in ground garden. Mine are in boxes so I applied it heavily around each of the boxes. Then I did it around the perimeter of our fenced in yard as an added determent. I’ll let you know who wins the next round of the gardening wars with the bunnies. The cinnamon sticks and peppermint oil did work with the chipmunk. Now to figure out what will work with the squirrels other than using a have-a heart trap and relocating them to Pennsylvania. They’re territorial creatures and can return within a 5 mile radius. Taking them across the Delaware River minimizes their return. Yes, they’re cute creatures but they lose their novelty when they dig up your plants and eat your bulbs.

In the pictures are basil, oregano and kale that are happily thriving in rail planters away from the bunnies. The squirrel seems to ignore them, he prefers the strawberries, mint and the lavender. He digs them up but doesn’t eat them unless there’s ripe strawberries.

diyMFA has interesting printouts available for download. I’m really enjoying this book immensely . The chapter I’m reading is about bringing characters to life. I always feel like mine are flat. So I’m hoping there’s insight as to how to make them feel more alive and realistic.

I started Ursula K. Le Guin’s Conversations on Writing with David Naimon this morning with my coffee. Delightful read, it’s like we’re sitting down at a table discussing different thoughts on writing. I was particularly amused when I read, “Children know perfectly well that unicorns aren’t real” says Ursula K. Le Guin. “But they also know that books about unicorns, if they are good books, are true books.” My granddaughter, Olyvia (7 years old)  would agree, she’s a huge unicorn fan. I remember her telling me that if they’re in books, they’re real.

Conversations on Writing is broken down into four sections, Introduction, Fiction, Poetry and Non-Fiction. So you can read whatever section you want or in whatever order you want.

I sauteed mushrooms, scallions, tomatoes, kale and zucchini in olive oil with fresh oregano, basil and coarse black pepper than tossed it on top of spaghetti with shredded mozzarella cheese for dinner. I made us garlic toast to go with it. It tasted awesome but it didn’t take long for the heartburn and shoulder pain to show up. I took the Prilosec as instructed before dinner as instructed too!  Frustrating.  The scallions, kale, oregano and basil were picked fresh from our garden. I can’t wait until the tomatoes ripen I have lots of them on the bushes already. I have zucchini blossoms but no fruit behind the bud yet.

I’ve switched to the magenta, but have only done one row thus far. I wasn’t sitting long enough to work on it.

Song of the Day:

I chose When Will I See you Again by the Three Degrees. This song’s background I learned from reading America on Coffee’s blog this morning. I hadn’t thought about this song as a choice until reading the blog but it feels appropriate with the first almost upon us. It was written by a pair of Philadelphia song writers Kenny Gamble and Leon Huff.  Shelley Ferguson sang the lead,  with back-ups Fayette Pickney and Valerie Holiday.

The reason I feel it works is because we’re approaching the one year anniversary and its just as painful as the night we got the call. Johnny.  I want so much to share precious moments with you again. If only we had more time. Thirteen years is not long enough for any of us. You’re just too young to be dead. Mom and Dad and your little brother Jacob miss you.  Your sisters Mikhayla and Caitlyn miss you. Grammy and Grandpa miss you. You’re other Grammy and Grandpa miss you. Our world just isn’t the same without you.  We love you Johnny.

“When he died, all things soft and beautiful and bright would be buried with him.”~ Madeline Miller

“Sadly enough, the most painful goodbyes are the ones that are left unsaid and never explained.” Jonathan Harnisch

Cancer today, you’re not a priority,

wtf Am I On About Now?
THE LITERARY JUGGERNAUT