It began as a little girl’s wish to have a magical place of her own. She prayed fervently every night, but nothing changed. She simply stopped believing in magic. Who needs magical wishes.

Time passed, and now she was lying on her death bed waiting. She knew better than to hope for it to come quickly.

Her granddaughter burst into the room. “Grandma, there’s something you have to see.”

“But Grandma, there’s an island. It wasn’t there yesterday, but it is today. Some people are saying it’s dark magic. How can it be dark with all the beautiful flowers in bloom?.”

“Grandma, please come to the window. I know once you see the magical island, you’ll feel better.”

She wanted to lie here. She felt so tired, her time must be near. Yet, she didn’t want to disappoint her granddaughter. She tugged with her all her might to upright herself. It took a lot for her to stand, but she made it. She grasped the nightstand table top and then the rocker until she finally made it to the window.

The sky didn’t have cloud anywhere to see.. The ocean looked ebony more than blue to her old eyes. She vaguely recalled a sailor’s warning when a sea looks deadly calm. She craned to see the bay.  There was an island with a rocky shoreline with lush green trees and flowers in every color under the rainbow. Were her eyes playing tricks on her?

“Megan, get your father, please.”

“But, Mom, you’re not strong enough.”

“Charles, take me out to the island before its too late.”

Charles and Megan helped her down the stairs and across the yard. She looked like an old porcelain doll in the bright sunlight. They had to pause several times to let her catch her breath before moving on, but eventually, they made it to the pier.

“Hurry, my time is running out.”

He didn’t understand his mother’s urgency.  It had been a very long time since she had been focused on anything, let alone walk. He paddled the boat until they were deep enough to drop the motor down. He watched his mother staring straight ahead, holding Megan’s hand. The wind teased her silver strands free from the bun Megan had created for her Grandma.

“Charles, please bring the boat close enough for me to walk.”

“Give me a minute, Mom, to tie the boat off, and we’ll come with you.”

Charles and Megan watched Grandma struggle to stand in the gentle waves.  Her frail body was hunched over her cane as she navigated to the shore.

“Dad, why can’t we go with her to help? I’m worried she’ll overdo.”

The sky darkened as they waited in the boat, He became worried. The sea became challenging in a little boat. He needed to get them back home safely. He called out to his mother, but she didn’t answer. He and Megan frantically searched for her.

Grandma was lying beside the mountain laurel. He noted the peaceful expression on her face and knew without checking, she was gone. He gently lifted his mother, surprised how little she weighed. All these years, she was a force to be reckoned with, yet at this moment, a feather weighed more.

He navigated his mom and daughter back to the mainland. The rain fiercely poured as they tied the boat to the pier. They scurried back to the house.

“Megan,  please get dry clothes. I’m going to place Grandma back on her favorite rose comforter until I can reach the coroner.”

Megan didn’t move. She waited patiently for her father to settle Grandma, then she combed her hair back in place before kissing her forehead. “I love you, Grandma.”
Megan glanced out her bedroom window. She screamed, “Dad, the island is gone.”

“What?” He ran outside.It had vanished just as Megan said, the dark sea stretched for miles with no land in sight. 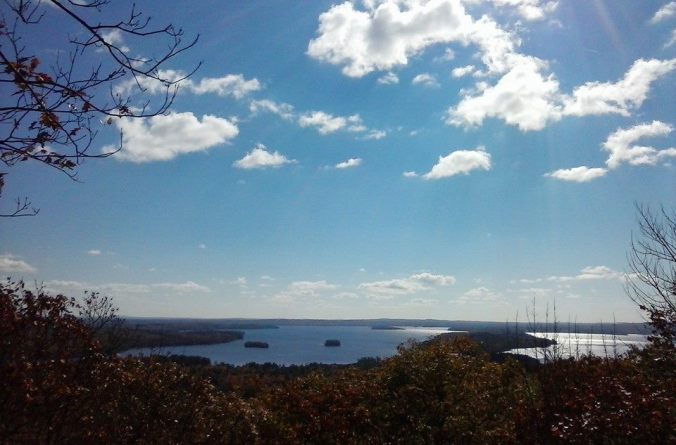