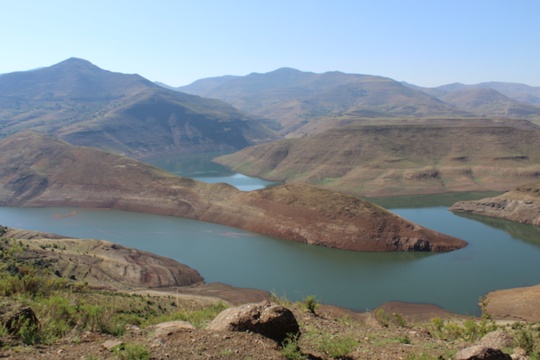 We’re going to be here for a couple of days.

https://www.safaribookings.com/tours/t29369
The mountain kingdom of Lesotho is out-of-this world for its sheer mountain beauty. Combine that with its unique culture where the people have combined a 21st approach to certain day-to-day activities whilst holding onto their culturally unique way-of-life and it blends into an amazing experience. Our guests are often visiting Lesotho whilst on holiday in South Africa. We have perfected a 3-day tour which incorporates many of the top things to do in Lesotho, despite being on a time budget.

This is our lodging, Bird Haven.

We’re leaving from Dar-es-Salaam, it’s a seven hour flight from Tanzania. We will be arriving at 3:00pm then directly heading up the Pass. So get some sleep on the plane because we have a real long day ahead.

We travel up the Pass into Lesotho in 4×4’s, looking forward to the afternoon of culture, history and amazing scenery. Cultural Immersion – a visit to a local Basotho village. Roof of Africa Route – spectacular views from the top of Africa! Bushman Paintings – interesting history into the nomadic Bushmen.
Overnight accommodation at Bird Haven in Leribe, in traditional style rondavels.

https://en.wikipedia.org/wiki/Sani_Pass
what was your impression of Sani Pass?

This culture is very unique. What were your impressions?

I’m inclined to agree with one of my traveling cohorts 50% percent of me says this ride is insane, they should be calling it in Insanity Pass not Sani Pass and the other 50% of me is too damn scared to open my eyes especially when the 4×4 bounces all over the place and the gravel crashes down the embankment. I’m going to strangle our guide…oops that me, what was I thinking. The route up to Sani Pass by South African law can only be traveled by 4×4 vehicles. It’s totally understandable after seeing the conditions.

I don’t know about you but once we reach the stopping point I’m jumping quickly to the ground and even sigh in relief. Phew. My first glimpse of the village made me chuckle. All I could think of was fairy houses or bird houses. The inside is perfect, that bed looks so inviting.

“Lesotho is the land of the Sotho people, the Basotho (previously spelled as Basuto), a Bantu people who have lived in southern Africa since the 5th century CE. The Basotho nation was forged by King Moshoeshoe I, when he united disparate clans of Sotho-Tswana origin in 1822. Most Basotho live outside Lesotho, in what is now the South African province of Free State, an area they lost to the Boers in 1858. Sesotho, the language of the Sotho people, is, with English, the official language and spoken by almost everyone in Lesotho. About three quarters of Lesotho’s 2 million people live in rural areas, mostly in small villages. Friendly people, they are very welcoming to visitors.”~ https://ozoutback.com.au/Lesotho/people/index.htmlci

There was a Mokhibo dance performed by the Basotho women. It’s amazing how quickly they move upon their knees to their feet. Then we were serenaded by a group of young men that the guide called herd boys with an unusual instrument called the lesiba. It’s a stringed and wind instrument consisting of a string and feather on which the musician blows, using his mouth as a sound box, kind of like a jew’s harp.

I’m so tired after the flight from Tanzania and then the ride in the mountain air I just want to crash but the guide is insistent we see the
by
BCoF:Prompt: Write about Katse Dam https://www.tripadvisor.com/Attraction_Review-g293803-d1764272-Reviews-Katse_Dam…

“The Katse Dam concrete arch dam on the Malibamat’so River in Lesotho, is Africa’s second largest double-curvature arch dam.he dam is part of the Lesotho Highlands Water Project, which will eventually include five large dams in remote rural areas. The dam is just below the confluence of the Bokong River, which forms the western arm of the Katse reservoir.” ~ wikipeida

Unfortunately the families displaced because of the dam have struggled to re-establish their livelihood. A plant refuge was created, it is called the Katse Botanical Gardens and many of the plants that would have been destroyed are now here. And if these situations weren’t bad enough corruption was discovered and the court systems had to intervene, convicting those who took bribes and even banned one company from ever functioning by the World Bank.

The view is amazing and the structure is unique, the way the arch curves is unlike any other damn I’ve seen. The water marks on the stone remind me of Lake Mead. I’m always afraid to look whenever I go to see my daughter because in the years I have been there the decreased water is clearly visible. Lake Mead is very dependent on the Colorado River and without the snow run off the river is also quite low. I worry that Lake Mead will become totally dry before my demise.

But with idiots like we have in office who deny global warming exists, it will probably happen sooner than my demise because there’s no accountability on water usage.

Reviews and interviews, with a focus on Australian artists

wtf Am I On About Now?
LITERARY EXPRESS

Let's learn something from each other